A LETTER TO THE AMERICAN EMBASSY IN PARIS

Thanks to the generous support of the American Embassy in Paris, we succeeded in having over 500 children come together to celebrate and sing the life of Martin Luther King on the afternoon of October 17th, 2012 at the Alhambra Theater. We worked for over three years to put together this unique event, and as we continue our musical journey, we hope to share these intense moments of music making and the values of learning to sing and live together in harmony in cities all over the world.

You will find in the annex a series of documents to show you how I have achieved my objectives. I have not finished exploring the method, but my instinct has helped me to work with children from Paris schools around the syncopated High Life music of Ghana and singing a message of tolerance in English and talking about the life of Martin Luther King. My teaching target is 4th, 5th and 6th graders whose average age is between 8 and 11 years old. They have the physical capacity to practice the songs for 90 minutes with the coordination that this music calls for as well as the mental concentration and a receptiveness to the message of learning to live together by discovering and understanding those different from themselves.

On Wednesday October 10th we hosted a big dress rehearsal at the Salle des Fêtes of the Town Hall of the 20th quarter with the participation of over 200 students from the Paris recreation centers as well as the private schools Paul Ricœur from the suburbs and the Massillon in the 4th quarter of Paris. The Peace Oratorio’s South African star Portia Solani Manyike got things off to a roaring start by performing a capella The Circle of Life from the Lion King, and the kids were immediately enthralled. They then stood up and we all sang together Happy Feet and Brother, Brother the two songs I had previously rehearsed with all the different groups of children that were participating. The kids were singing very well so we immediately went on to the speaking part of the program. The American lawyer from the American Embassy Taais Jacobs-Grosse told the story of the life of Martin Luther King for more than 15 minutes to the very attentive children; then Portia sang a song from her native South Africa followed by a spellbinding Zulu dance. She spoke with deep emotion of her childhood in the South African township Alexandria in the 1980’s and what is was like for her to live in segregation under the apartheid laws.

Finally, before rehearsing the two songs one last time, I played my guitar solo Elegy from the Peace Oratorio which is a piece of reflective instrumental music. I started playing this song without words during my sessions with the children in the schools, and I realized that they love to listen to instrumental music! When I played it in the cavernous hall of the Salle des Fêtes for the 250 children, there was absolute silence. It’s incredible the attention that these children brought to my music. I was very happy, even gratified. We must never underestimate the capacities of children. On the contrary, we must stimulate them with rhythm and song, inspire them with the beauty of music and the lives of people such as Gandhi and  Martin Luther King, and instruct them on the art of peaceful negotiation and mutually beneficial understanding.

On Wednesday  October 17th at the Alhambra Theater I had the honor of having over 70 singers on stage as well as some excellent soloists and the children’s choir les Polysons directed by Elisabeth Trigo. There was also a string quartet and a young musician who played the French Horn parts from my written score as well as improvising a solo on the trumpet. The amplified instruments included the Hammond organ and the Fender Rhodes, electric and acoustic guitars, electric bass and stand up bass, along with African percussion instruments including the Talking Drums from Ghana. I had the pleasure of introducing each musician who then played a short solo on his/her instrument to show the children the sound and the way each instrument is played. On the stage of the Alhambra our young guests saw and appreciated the musicians from the classical orchestra mixed with traditional African musicians as well as the more modern musicians; this proved to be an enriching experience for their young impressionable minds. The children then stood up and started moving their feet and clapping their hands to the rhythm of Happy Feet and they sang along with all of the musicians and the Highlites choir! The sound of over 500 children singing in tune and in rhythm with my choir and orchestra will be forever etched in my musical memory. It was one hour of music with a narration of the life of Martin Luther King read by Mr. Curtis Robert Young.

I am an artist, I have never studied child psychology, I go to my task with the desire to share my passion for music and for brother and sisterhood. If I can inspire a child to be successful in his/her studies because he/she is passionate about music and has the desire to be successful, I will have achieved my objective. I write to you what I said to those 500 children at the end of their show because it sums up everything that I’m trying to put together in the Paris recreation centers and beyond. I said, « Before you go, I would like the choir, the musicians and all the adults to applaud you the children, you are fantastic ! And do you know why ? Because we have spoken of the past about Gandhi and Martin Luther King, and today we speak to you about Nelson Mandela and President Obama, but the future, where is it ? It is not us, it is you. And perhaps a future President is a boy or a girl in this theater. Our hope is for you children. Work hard at school ! Be successful in your lives ! Thank you!”

I hope to continue my work at a broader level here in Paris, elsewhere in France and  my country the USA. I want to reach out to children from all kinds of neighborhoods in all parts of the world with my guitar as an Ambassador of Peace! Thank you again for your support of this project, I am at your complete disposition for any questions or comments that you might have. 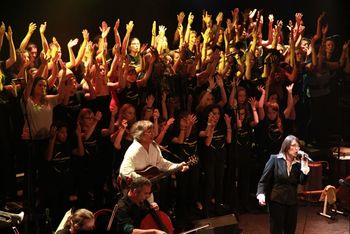 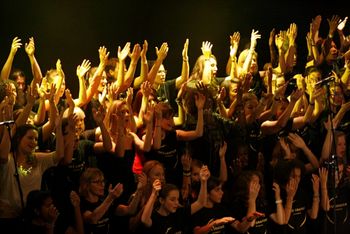 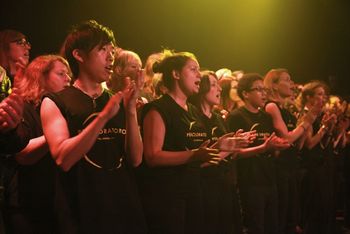 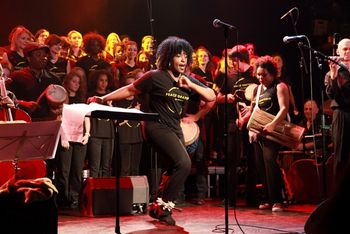 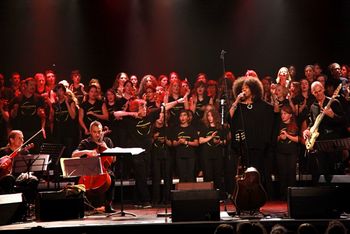 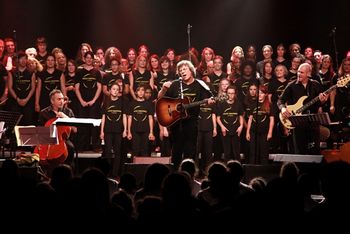